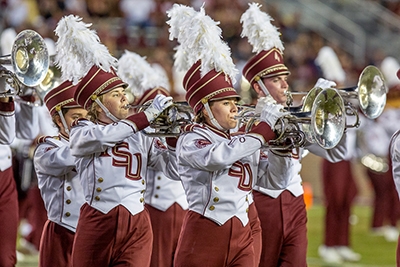 The weeklong trip to Paris and the beaches of Normandy from June 3-10 will mark the third time in the Marching Chiefs’ 80-year history that the band has performed overseas.

“It’s a huge honor to represent FSU and the United States at the D-Day 75 Normandy Parade,” said Director of Bands Patrick Dunnigan, who led the Chiefs on their last international trip to London in 1997. “When you think about all the soldiers who fought in France, what a big difference they made in the war and the thousands of young men who never returned home, it’s overwhelming.”

During the parade, the Chiefs will play “March Militaire Française” as they march about a mile-and-a-half between Vierville-sur-Mer and Saint Laurent-sur-Mer. The two villages overlook Omaha Beach, one of five beaches along the Normandy coast where more than 150,000 American and Allied soldiers landed by sea and air June 6, 1944, in the largest seaborne invasion in history.

More than 4,000 Allied soldiers died in Operation Neptune, the military code name for the D-Day invasion. That heavy sacrifice inspires members of the Marching Chiefs as they prepare to honor the World War II heroes.