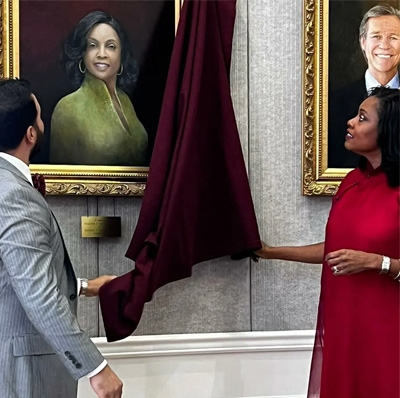 Smith-Gordon’s impact is two-fold—her gift will support cultural diversity programs and scholarships for Black law students, and her portrait will be a lasting reminder of representation and limitless possibilities for these students.

“There is a great need to help cultivate Black lawyers and actively encourage their success,” Smith-Gordon said. “Be it a brick, scholarship or an event, as one who was a Black law student, I assist because I understand the challenges.”

Smith-Gordon hopes to see more diverse programs and lecturers at the law school. Diversity, she says, makes us all “stronger, wiser and often better.” As the precursor to the judicial system, the culture of law schools must reflect diversity, she said.

FSU College of Law holds a special place in Smith-Gordon’s heart. It is where she followed in her mother, Jeraldine Williams’, footsteps. Williams graduated from the FSU College of Law in 1981, after a stellar career as a journalist. Williams was among the first Black students to integrate the University of Florida College of Journalism and the first African American to be awarded the Hearst Journalism Award.

Her father, Walter L. Smith, Sr. also left a rich legacy in higher education. He was an education leader at the center of desegregation efforts in the South and later served as the second president at Roxbury Community College in Boston, Mass., and the seventh present of Florida A&M University.

Smith-Gordon continues her parents’ legacy with her service to FSU College of Law. She co-founded and served as the inaugural president of the college’s Black Alumni Network—the first of its kind in Florida. She currently serves on the College of Law’s two leadership boards: the Board of Visitors and the Alumni Association Board of Directors.

Smith-Gordon has been a trailblazer; however, that was not her motivation. She says philanthropy matters, but giving voice to students through direct mentorship or simply listening matters too, as well as providing meaningful input to advance the law school’s mission.

“I am very honored that my portrait will be hung,” she said. “I pray that it will inspire others to know that their goals are not only possible but boundless.”

She is also proud to know that her financial gift will be long-lasting. She is grateful to be in a position to care enough, build a bridge and pay it forward.