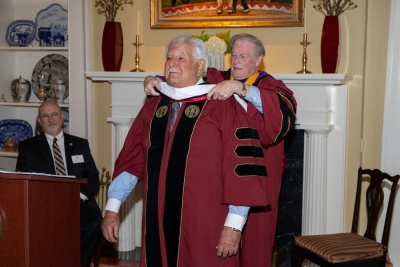 FSU President John Thrasher presided over the small, socially distanced ceremony held at the FSU President’s house. Thrasher said that, while the COVID-19 pandemic forced a smaller ceremony, he was thrilled to honor Hold.

Thrasher thanked Hold for traveling from his home in Austin, Texas, and joked that between Hold’s Ph.D. and his newly earned honorary doctorate he would have to go by “Doctor Doctor.”

Vice President for Faculty Development and Advancement Janet Kistner, Michael Hartline, dean of the College of Business, Vice President and Intercollegiate Athletics Director David Coburn and Michael Alford, president of Seminole Boosters, spoke of the significance of Hold’s long relationship with the university.

Hartline commended Hold’s contributions to the College of Business, including a $5 million gift to the Risk Management and Insurance program in 2012 and creating the William T. Hold Scholarship Program, which supports students pursuing a Master of Science in Risk Management.