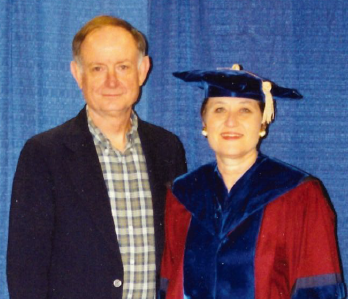 After marrying in 1964, Florida State University alumni Jay (’64, ’70) and Dr. Sue Newman (’71) found themselves moving many times across the East Coast. The couple supported one another throughout their professional and academic pursuits—including five degrees between them—but regardless of location, they always discovered a haven in local theatre programs. From Greenwich Village in New York City to down south in Macon, Georgia, the Newmans became devoted theater-goers and performing arts advocates.

It was in the late 1980s that Mr. Newman recalls their interest in theater developing into the appreciation they have today. When Dr. Newman was completing her doctoral degree in education at the University of Pennsylvania in Philadelphia, they decided to join two notable theater programs—the Wallis Annenberg Center for the Performing Arts and the Walnut Street Theatre, the oldest continuously-operating theater in the English-speaking world.

It's no surprise that when the couple eventually made their way back to Tallahassee in 1993, they immediately sought ways to support Florida State, including the School of Theatre.

“Sue and I both value the education we received at FSU, and we wanted to help financially support Florida State students and programs in various ways,” Mr. Newman shared. In addition to becoming season ticket holders and serving on the FSU Theatre Patrons Association board, the Newmans made generous contributions to WFSU Public Media and the Southern Scholarship Foundation, where he served as a board member for 14 years.

Blending their fondness of the dramatic arts and academic interests, the Newmans decided to establish the Jay and Dr. Sue Newman Research Award in Theatre Studies, which recognizes graduate research excellence through conference participation, travel and other academic activities related to student research.

This past January, the couple committed a blended gift of approximately $75,000 in cash and life insurance to endow the award, a first such milestone for the Theatre Studies graduate programs. A gift that lasts forever, the principal of an endowment is never spent but strategically invested, and those investment profits are utilized to fulfill the endowment’s purpose.

“Our hope is this award will assist in attracting serious scholars interested in graduate research,” Mr. Newman expressed on the couple’s behalf. “This type of research will add to the reputation of the program, as well as to the larger body of knowledge about the history and development of theater.”

Director of FSU's Theatre Studies M.A. & Ph.D. Programs Mary Karen Dahl shared, "Jay and Sue's latest display of generosity speaks volumes to the comprehensive training and research we're able to offer our graduate scholars. I am grateful for their confidence, and their philanthropic legacy will shine in our graduates’ work across the country in theaters, academia and related professions."