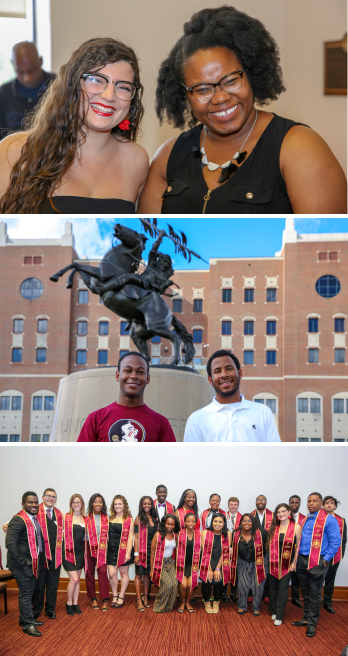 While on her way to a meeting, Florida State University alumna and Bachelor of Social Work Program Director Pam MacDill (’77) walked past FSU’s Unconquered Statue standing tall and prominent outside of Doak Campbell Stadium. At the time, MacDill was working with other FSU administrators to institute a new program at the university, one dedicated to supporting the well-being of Florida State students who had experienced foster care, homelessness, relative care, or ward of the State status.

“I brought the idea of ‘Unconquered Scholars’ to the meeting, which is how the program got its name,” MacDill recalls of the day. “These students exemplified what it meant to be a true FSU Seminole, overcoming considerable odds to be a student at Florida State.”

The initial inspiration for the Unconquered Scholars Program occurred to MacDill in the spring of 2012. “I attended a conference where there was a presentation about relatively recent initiatives at several universities called ‘Guardian Scholars’ to provide supportive services to former foster care youth,” MacDill shared. “I knew [the university] had a long-standing commitment to first-generation students, but I was surprised that this demographic hadn’t been identified as a special group.”

The Unconquered Scholars Program’s first cohort was formed with 28 incoming first-year students in the fall of 2012. The students became actively involved in support groups, weekly mentoring and social events—even creating a Student Advisory Board.

Housed under the FSU Center for Academic Retention and Enhancement (CARE), MacDill and CARE staff collaborated with the students to not only refine the program’s structure but to receive input on programming based on their specific needs. Together, they were able to identify gaps in services—which included information on budgeting and personal finances, nutrition, navigating relationships, transportation issues and the challenge of being on-campus during the annual FSU Family Weekend when other students had parents visiting.

“Through my experience as a social worker, I understand how vulnerable this population of students is, with less than three percent of foster youth graduating from college,” MacDill explained. “In the last eight years, we have seen the program grow. We are the first program in the U.S. that integrated social work knowledge, research and skills with the higher education perspective of student success that has created a 360-degree approach to assist this high-risk population of students and their needs.”

Both MacDill and her husband Leslie (’99) have been avid champions of the Unconquered Scholars Program since its inception, which now numbers over 120 students. They continue to devote their time getting to know and mentor several scholars individually, including those studying within the College of Social Work, and acting as chaperones on trips. The MacDills also made a recent pledge to establish the MacDill-Wold Unconquered Scholarship Endowment in the College of Social Work, which will provide much-needed financial support for social work students taking part in the Unconquered Scholars Program or those completing internships in the areas of child welfare and pediatrics.

“I had not [previously in my career] worked with former foster youth attending college, but they taught me about their unique needs. They face a myriad of obstacles, and I knew we could provide the expertise to help,” MacDill shared. “We hope this scholarship can ease the financial burden for those who have had to overcome so many challenges, ensuring they succeed not only in their academic career but throughout their lives.”

The mission of the Unconquered Scholars Program is to provide qualified Florida State University students guidance, continual mentorship, advocacy, security and a voice to further ensure their academic success and long-term independence. Currently, the program’s four-year graduation rate is 85%, the six-year graduation rate is 90% and the average GPA is a 3.0, which is significantly higher than similar programs at other universities.

Learn more about the Unconquered Scholars Program and how to support.