A Force for Good on Two Wheels 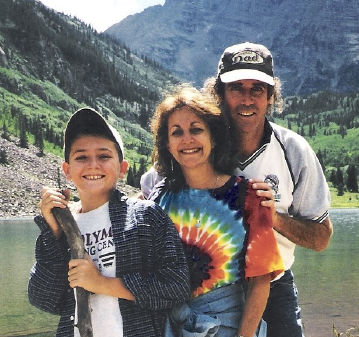 Kevin Neidorf was a force for good on two wheels. His love of learning, exploring and helping others, along with riding bicycles and other outdoor pursuits, took him to far-off places. But wherever he roamed, he significantly impacted individuals and the wider community.

Kevin’s mother, Paula Ginsberg-Neidorf, recalls he fell in love with cycling young and started building and fixing up bicycles at just 14 years old. Kevin built a bike out of bamboo his senior year at South Plantation High School, where he was part of the highly selective Environmental Science and Everglades Restoration Magnet Program.

Hailing from Plantation, in southern Florida, Kevin chose FSU because of the broad course offerings around film and media production—he had taught himself how to shoot and edit video in high school, helping out fellow students and teachers alike.

Buoyed by his mother’s advice to “find his community” at Florida State, Kevin sought ways to use his skills with bicycles to make friends and make a difference. He was captain of the FSU Cycling Team and created films featuring cycling competitions and the cycling team. One of those videos, “The Magic Hour,” won the 2014 Pedals 4 Professionals Contest from the Reliance Foundry. He also worked at the local charity Crank It Up, where he fixed and built bicycles for needy Tallahasseans.

Kevin never met a stranger and connected with people from many different backgrounds. Paula shares how he befriended Dr. Jean-Charles Lebeau, now a Ball State assistant professor in Sport and Exercise Psychology, during his time at FSU, ensuring he was part of cycling adventures and friendly outings despite an age gap and language barrier (Lebeau is French). Kevin was an old soul who looked at things differently and sought to build community and camaraderie.

Graduating with honors from FSU in 2013 with a Bachelor of Science in digital media production, Kevin jumped headfirst into combining his love for bicycles and the outdoors with his newly acquired skills and long-standing talent.

After graduation, Kevin moved to Columbia, South Carolina, to work in digital video production for Hawley-Lambert, a major U.S. bicycle retailer. Intrigued by the outdoor pursuits and community in the Pacific Northwest, Kevin moved to Portland, Oregon, where he became creative director for River City Bike Shops. He took time off to bike through Europe and New Zealand during his tenure there.

“Kevin is a great example of what we hope for all our students at CCI,” said Dr. Stephen McDowell, interim dean of FSU’s College of Communication and Information. “He was able to take his talent and passion for media production and what he learned at FSU and make an exciting and successful career.”

In addition to producing creative and successful content for the company’s brand, Kevin used his talents to continue passionately advocating for causes he cared about, such as environmental and social issues. Kevin took time off from River City to shoot the documentary “Hazelnut Grove,” which focused on the homeless population in North Portland. Kevin moved there for a week during the winter season to get a true understanding of the issue.

“No matter what he did, he learned about the culture and the people,” said Paula. “He never accepted the status quo, and nothing could stop him.”

Kevin’s life was tragically cut short in a fatal accident in 2019 at just 28 years old. People mourned his loss across continents and countries. Paula and Scott Neidorf were determined to have Kevin’s memory and legacy live on.

The Neidorfs established a student award in Kevin’s name at FSU’s College of Communication and Information, which will make a difference for talented Seminoles for generations to come. By creating the award as an endowment, where the principal is invested and never spent, Kevin’s life and talent will be remembered in perpetuity.

“What I liked about donating to create this award at FSU is that it would be specific to Kevin,” shared Paula. “I want the recipient to feel a personal connection to him and what he contributed during his short time in our lives.”

“If you were wondering if your donation makes a difference, do not wonder,” said Ada Colli, Kevin Neidorf Student Award recipient. “In my life, it is making a huge difference. Thank you for the gift and your commitment to helping students of this great institution.”

Paula has also taken her background as an educator and, just like Kevin, is using her talent to help others. She advocates for parents who have lost their only child, created and facilitates numerous support groups across the country and regularly contributes articles and insights to organizations such as Live-Evermore, Alive Alone and more. The ultimate goal is to keep Kevin’s memory alive—and it is in numerous Florida State students.

“Your generosity is truly an inspiration to me,” said Brenda Thelusca, another Kevin Neidorf Student Award recipient. “I hope that one day I will help students achieve their goals, just as you have helped me.”

Rubber to the Road: Stub Stewart and Banks-Vernonia