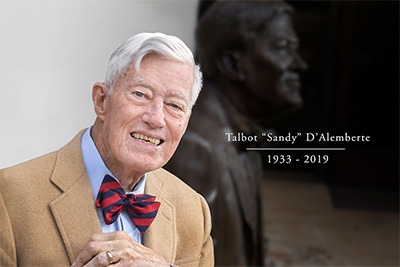 A brilliant legal mind and international champion of human rights, Florida State University President Emeritus Talbot “Sandy” D’Alemberte passed away May 20 at the age of 85.

The consummate Southern gentleman, D’Alemberte could often be seen wearing his signature bowtie around campus at Florida State, where he served as its 12th president from 1994 to 2003, dean of the College of Law from 1984 to 1989 and as a law professor for much of his career.

As university president, D’Alemberte brought funding and, ultimately, accreditation for the new College of Medicine, which welcomed its first class in 2001. He completed the university’s first major capital campaign and through it established the Center for the Advancement of Human Rights and other academic improvements.

“I’ve known Sandy for more than 40 years,” said FSU President John Thrasher. “He’s been a friend, a mentor and an inspiration to me. He was a person of great integrity with an abiding sense of social justice who made a difference in people’s lives here and around the world through his defense of the First Amendment and advocacy of human rights.”