Florida State’s Student Success Practices a Model for the Nation 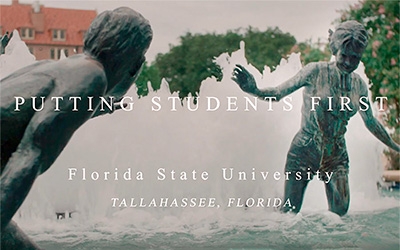 Florida State University’s student success initiatives are showcased as a national model for increasing completion rates and reducing inequities in a video released by the American Academy of Arts & Sciences.

The video highlighting FSU is one of three videos focused on the national priorities set forth by the Academy’s Commission on the Future of Undergraduate Education: quality, completion and affordability. The video—produced with a grant from the TIAA Institute—highlights Florida State’s commitment to retention and completion, which has resulted in high graduation rates for students from all backgrounds, including those who were formerly homeless, in foster care or first-generation college students.

“I’m very proud of this,” said Provost and Executive Vice President for Academic Affairs Sally McRorie. “It’s a good representation of who we are as a university and what we hold dear.”

Florida State’s four-year graduation rate of 72 percent ranks among the Top 10 public universities in the country and is No. 1 in Florida.