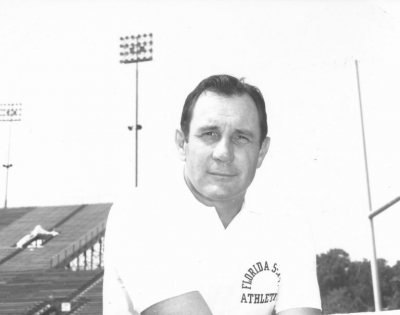 Serving as the head football coach at Florida State University from 1960-1970, Coach Bill Peterson spent ten seasons developing a program that could contend with the best. Referred to as simply “Coach Pete,” his passion for the Seminoles and commemorated pass-oriented offense helped capture many “firsts” for the garnet and gold—including a win against state rivals in Gainesville, a Top 25 Associated Press poll ranking and a bowl game victory.

His son, Bill Peterson Jr., shared that Coach Peterson’s fondness of FSU and Tallahassee developed from moments off the field as well as on. “One of my dad’s favorite memories came after [Florida State] beat the University of Florida in football for the first time,” he said. “He and our mom went to dinner at the Silver Slipper following the game, and when they walked in, the entire crowd broke out in a raucous chorus of ‘For He’s a Jolly Good Fellow.’ He was always so appreciative of the gesture.”

As Seminoles fans and football enthusiasts alike continue to see his influence transcend into the modern game played today, Peterson Jr. summed up how many remember his father—“Dad was a visionary and literally changed the way college football was played.”

At Florida State though, Coach Peterson’s legacy has endured beyond the successes he found on the gridiron. Established in 1989, the Coach Bill Peterson Endowed Scholarship has afforded students the opportunity to earn their degrees at Florida State for nearly 30 years.

“My dad was always grateful for the friends and former players whose contributions made this scholarship possible,” Peterson Jr. said. “Even though football coaches receive a lot of grief over their support of academics, I can personally vouch for how important academics were to him. He stressed this to his players, and it doesn’t surprise me how many have become successful businessmen, coaches, generals and even collegiate presidents.”

The Coach Bill Peterson Endowed Scholarship has awarded more than $127,000 to FSU students since 1994, exemplifying the transformative power of endowed gifts. A gift that lasts forever, the principal of an endowment is never spent but strategically invested. Those investment profits are used to fulfill the endowment’s purpose.

A recent recipient of the Coach Bill Peterson Endowed scholarship and former Florida State men’s basketball player Dwayne Bacon expressed his gratitude for being able to continue his education at FSU. “I was blessed to be a part of such an amazing team and have coaches who pushed us to be successful on and off the field. Though I currently play for the [Orlando Magic], I want to finish my degree because education is such an important aspect of life. It’s something that can never be taken away.”

Peterson Jr. shared another one of his father’s favorite memories, a time when he was considering a coaching offer from the San Francisco 49ers and students marched to their house in “protest” of his potential departure. “You can only imagine how much he just loved FSU. As Bill McGrotha put it the next day in the Tallahassee Democrat—The answer is much like the one Louis Armstrong gave when somebody asked him what jazz was. ‘If you have to ask, you’ll never know.’ He would be proud to see how many students have been helped through his scholarship.”